Getting out of my comfort zone hasn’t always been easy. One of my goals since moving to Austin has been to get involved with the community and meet like-minded people. So, when I saw an event on Facebook from a group called BossBabes ATX, it caught my attention.

Women supporting women in a fun, laidback atmosphere sounded like the perfect way to get to know the Austin community and put myself out there in my new hometown. BossBabes ATX is a community-driven organization that brings together women-identifying and non-binary creatives, entrepreneurs, and organizers who are looking to promote their projects and aspirations while supporting each other and making new friends. Sounds amazing. Sign me up!

I decided to go for it and bought my ticket for the February community meet-up, which was the first one of the new year. I paid eight dollars and change for my ticket to attend the event at the Historic Scoot Inn. Networking events have never been my thing, mostly because I don’t like the awkwardness of going alone and walking up to strangers to strike up conversation, but the BBATX team makes it really approachable and welcoming. One of their main tips for the event is to “embrace the awkwardness” and put yourself out there just like everyone else. So far, I really liked how welcoming and encouraging everything seemed.

The night of the event was freezing cold and wet in Austin, so I wasn’t sure how the attendance would be. I showed up at the venue and made my way into the bar area where everyone was hanging out and trying to stay warm. I got in line at the bar figuring it was a good way to kill some time and have a look around at everyone without standing alone in a corner. It ended up working out great because that was when I made my first connection. I met a local artist, Kristin Moore, who creates beautiful oil paintings inspired by ever-changing cityscapes. From that point on, we buddied up and set off to explore and meet people together.

Here’s a list of activities and memorable moments from the night:

I went to this event with an open mind not knowing what to expect. I was hoping to meet some people and get to know women my age who are working on their hobbies and careers. I ended up connecting with four ladies and exchanging business cards with a handful of people throughout the evening. Overall, it was well worth going and I can’t wait to see what it’s like at one of the upcoming events when the weather is warmer. I have a feeling even more Austinites will show up when it’s back to the usual 70+ degree weather. Check out upcoming BossBabes ATX events like the highly anticipated CraftHER Market Spring ’18 on April 15 at Fair Market. Hopefully I’ll see you at one of the #BBATX events this year!

2 thoughts on “My First #BOSSBABESATX Event” 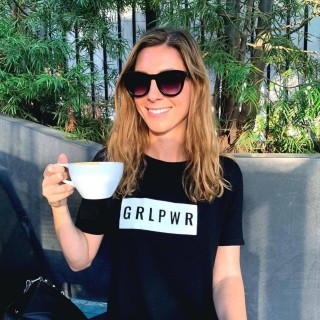 Hi there! Welcome to my blog. My name is Jasmina, but you can call me Mina. I'm a first generation Serbian-American. I was born and raised in Los Angeles, lived in Seattle from 2006-2017, and now call Austin, TX home. I love to read and research health and wellness topics, and share the best of my findings with others. Please send me a message if you have a question or comment, and I hope you enjoy my blog.